"The Time of the Doctor" is an episode of the British science fiction television series Doctor Who, in which the Eleventh Doctor defends a town named Christmas on Trenzalore, where he dies. The episode was shown in the United Kingdom on Christmas Day 2011 on BBC One, BBC America in the United States and on ABC1 in Australia. It is the ninth Christmas special since the show's revival in 2005. It starred Matt Smith as the Eleventh Doctor and Jenna Coleman as Clara Oswald. This special also marks the first official appearance of Peter Capaldi as the Twelfth Doctor. 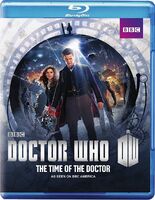 Add a photo to this gallery
Retrieved from "https://christmas-specials.fandom.com/wiki/The_Time_of_the_Doctor?oldid=152620"
Community content is available under CC-BY-SA unless otherwise noted.