Christmas Specials Wiki
Register
Don't have an account?
Sign In
Advertisement
in: Specials, Hanna-Barbera, Originally aired on NBC,
and 5 more

The Town Santa Forgot (also known as The Town That Santa Forgot) is an animated Christmas television special produced by Hanna-Barbera. Originally broadcast on NBC on December 3, 1993, it is based on the poem Jeremy Creek by Charmaine Severson.

The special and A Flintstone Family Christmas were both nominated for the 1994 Primetime Emmy Award for Outstanding Animated Program (for Programming Less Than One Hour). However, it lost to The Roman City.

The special opens in a framing device featuring an elderly gentleman and his two grandchildren on Christmas Eve. The grandkids are anxiously waiting for Santa Claus, thinking only of the toys that he will bring them. Their grandfather sits down to tell the kids the main story.

The story is about Jeremy Creek, a little boy who knows nothing but greed. He throws temper tantrums every time he sees what he wants, and he wants everything he sees. After many complaints from the neighbors (and a huge crack in the wall), his mother and father decide they've had enough and inform him that he will get no more toys from them. Jeremy storms up to his room and starts playing with the thousands of toys that he already owns. While trying on a fake beard, he comes to a realization: if his parents wouldn't get him the presents, then he should ask Santa Claus instead. With a red crayon and papers taped together to form a list half a mile long, he writes every toy he can think of on it. He quickly finishes it and mails it in June.

July, August, and September soon pass, and Jeremy remains in his room waiting for Christmas to come. By this time, Santa has received his letter and, through his wisdom, believes that it has to come from a town, for no one kid could possibly want so much. So, looking at a church-sized map, he and his elves look all over the world for the town of "Jeremy Creek". One elf named Pomp finds it, and points out that it has never been on his route. Feeling guilty, Santa orders everything on the list, one for each boy and girl in the little forgotten town.

Halloween and Thanksgiving pass, and soon it is Christmas Eve. When night falls, Jeremy goes up on the roof of his house and waits for Santa to arrive, intending to snatch the toys from the sleigh. He eventually comes, but Jeremy is devastated when he passes by without stopping at his house, and he cries himself to sleep.

When Jeremy awakens the next morning, he rushes downstairs, hoping that maybe Santa snuck in through the window and left his presents under the tree after all. But to his dismay, he finds none there. Upset about this, he goes to watch the news with his parents. While doing so, he witnesses a report on television stating that Santa has brought holiday cheer to a swamp town that happens to share the same name as him. Upon hearing this, he is at first resentful that the kids there got all the toys he wanted, but when the kids on TV state that they'd like to give a thank-you to whoever wrote to Santa telling him to come to their town, his cold heart melts and he realizes that this accidental good deed of his makes him feel better than any present ever could.

Immediately following Jeremy's newfound change of heart, Santa appears in a small size, telling him that he's come to grant the town's hero whatever he wants. Jeremy replies that he doesn't really want anything, for he has learned that it is better to give than to receive. In the end, Santa makes him his assistant for helping him deliver Christmas presents, a task he lovingly accepts and continues to perform until he outgrows his seat in Santa's sleigh. Outside of Christmas, he also becomes a more caring boy and shares his toys with his neighbors.

The special closes with the narrator and his grandchildren, who have taken the story to heart and now don't care what they get from Santa. The grandfather then tells them that every few Christmases, Santa still picks out a little boy or girl to assist him in his annual journey. On the very last shot, some snow falls off the old man's mailbox outside to reveal the name "J. Creek", revealing to the audience that he was Jeremy Creek himself. 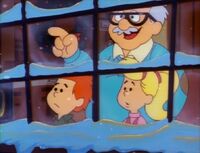 The narrator's grandkids are impatiently waiting for Santa. 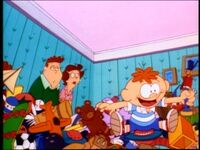 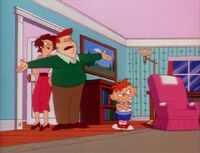 Jeremy's parents finally tell him they're not buying him any more toys. 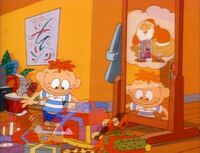 Jeremy gets the idea to write to Santa Claus for more toys. 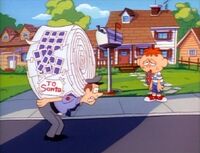 Jeremy sending his letter to Santa. 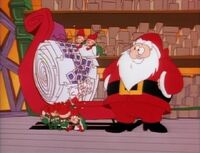 Santa and his elves are wondering who could possibly need this many toys. 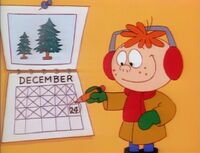 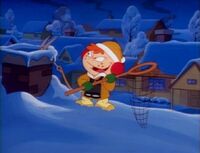 "The minute that Santa Claus passes this way,
I'm gonna claim every toy stuffed in his sleigh!" 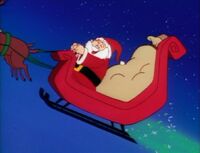 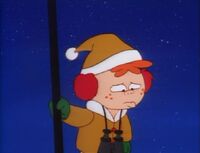 Jeremy is sad that Santa just passed by his house. 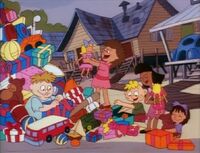 The kids in the swamp town playing with the toys Santa left for them. 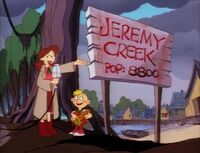 "This poor town, once joyless and bleak,
Goes by the name of Jeremy Creek!" 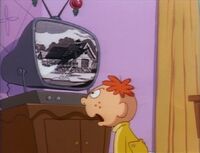 Jeremy is at first angry that the toys he wanted ended up in the swamp town. 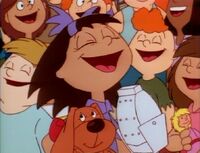 But when the swamp kids say "thank you" indirectly to him... 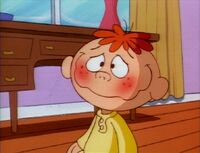 ...it makes him feel better than any toy could. 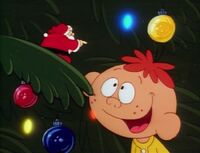 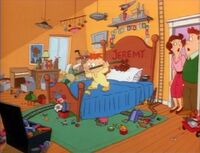 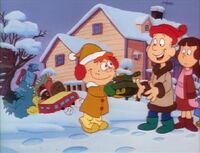 ...and starts giving his toys to his neighbors. 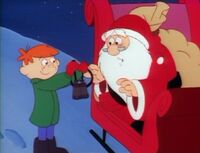 Jeremy gives up his position as Santa's assistant when he grows up. 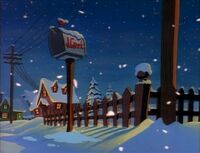 The narrator's mailbox reveals him to be the elderly Jeremy Creek.