The Toy that Saved Christmas is the first VeggieTales Christmas special.

Grandpa George tells a flashback Christmas story, to his daughter, about Wally P. Nezzer, the owner of a toy company, who is spreading the word via a television commercial for Buzz-Saw Louie that the meaning of Christmas is to get more and more toys. After seeing this, the Dinkletown kids were whining about wanting more toys. He explains to his assistant, Mr. Lunt, that this is a strategy to create demand for his toys in order to boost sales. The toy in question is called "Buzz-Saw Louie," the only toy featuring an actual working buzz saw built into his right arm.

The story is interrupted by a Silly Songs with Larry segment entitled "Oh, Santa!" Larry is staying up late awaiting the arrival of Santa Claus, eager to give him some homemade cookies. Instead of Santa, however, he is visited first by a bank robber (Scallion #1), then by a Viking (played by Pa Grape), and finally by an agent of the IRS (played by a Peach). They all take refuge is his home and eat his cookies (except for the IRS agent who Larry evidently considers too loathsome to invite inside). Santa finally shows up, but rather than being jolly he angrily chases after Scallion #1 and Pa Grape for stealing his "Belt" and "Hat." Larry is left without any cookies, and no Santa or friends.

On Christmas Eve, while most of the Veggie children are filled with a mad desire for the new toy, Larry, Bob and Junior go sledding. They happen upon a lone Buzz-Saw Louie toy that has questioned Mr. Nezzer's values and escaped the factory to find the true meaning of Christmas. Bob suggests that they go see Grandpa George. He reads the following from the Holy Bible, which is as follows:

In this, George explains to them that the true meaning of Christmas is not to get, but to give, the way God gave us Jesus, the greatest gift of all. The children are heartened by the news, but puzzle about how to tell the rest of the Veggies before Christmas Day.

The characters' solution is to sneak into Mr. Nezzer's toy factory and use his television studio to broadcast the message to all the surrounding towns. The plan is a huge success, except that Mr. Nezzer finds them out and threatens to get rid of them. He ties them to a sled and is about to send them downhill into a deep ravine when the other Veggie families intervene. Laura Carrot shows him kindness by giving him a gift, and he quickly repents the errors of his ways. However, the sled with Bob, Larry, Junior, and Louie is accidentally sent on its fateful course in the process but the Dinkletown kids were begging for more toys.

A chase scene ensues in which Mr. Nezzer and a half dozen Penguins attempt to save the doomed Veggies. The tables turn, however, when Buzz-Saw Louie is able to divert the sled's course, leaving Mr. Nezzer alone racing toward the ravine. Louie again springs into action, using his buzz-saw to rally the Penguins and save Mr. Nezzer just as he is about to plummet to certain death. Then, Buzz-Saw Louie puts the buzz-saw for good use making furniture and the special ends.

The special was said to be a very special episode of VeggieTales, mainly because it proved to be a big challenge for Big Idea Productions. It was made with the same number of people who worked on the previous episode ("Dave and the Giant Pickle"), but it was very hard to make. The episode was made around September of 1996 and at that time, the air conditioning at Big Idea's then-headquarters had been shut off and was being replaced. Suddenly, a heat wave had just hit Chicago and the employees pushed themselves to get the episode out in time since they couldn't ship out the Christmas special late.

As soon as everything was done, Phil Vischer began to suffer major chest pains from a bacteria eating at his heart. He had to stay in bed for the next month. He felt better afterwards.

In addition to those songs above, in one shot, in which Junior, Louie, Bob and Larry sneak past a penguin doing dishes, if one listens very closely you can hear a portion of Feliz Navidad from A Very Veggie Christmas album in the background.

The 1998 version has a lot changes from the original 1996 version prior to the premiere broadcast of The VeggieTales Christmas Spectacular on the PAX network:

As the Christmas episode of the show, the special has been edited from it's original length. More details TBA. 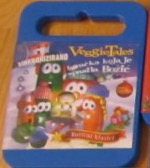 Add a photo to this gallery
Retrieved from "https://christmas-specials.fandom.com/wiki/The_Toy_that_Saved_Christmas?oldid=139608"
Community content is available under CC-BY-SA unless otherwise noted.