"Thomas' Christmas Party" is the first Christmas episode of Thomas the Tank Engine and Friends. It was produced for Central ITV and aired as the show's first series finale.

It is Christmas time on the Island of Sodor and Thomas and Toby are very busy carrying people and parcels along the branch line. Despite Annie and Clarabel complaining that they are overloaded, Thomas retains his festive spirit.

Near his branch line is a little cottage. This is the home of an older woman named Mrs. Kyndley. Thomas always whistles "Happy Christmas!" to her and agrees that Christmas would not be the same without her.

At the sheds, all the engines have been polished but Thomas does not mind and tells them he wants to throw Mrs. Kyndley a party to thank her for saving him from a landslide the year before. When she was ill in bed, she waved her red dressing gown out the window to warn Thomas and The Fat Controller sent her to the seaside to get better as a reward.

All the engines agree that a party is a great idea and hope that the Fat Controller agrees as well. He does, but on the day of the party, there is a heavy snowfall, trapping Mrs. Kyndley in her house. Thomas bravely puts on his snowplough and sets off with Toby to rescue her and soon, they arrive at the cottage which is covered in snow. Thomas whistles to Mrs. Kyndley to tell her they have arrived when suddenly, Terence the Tractor arrives with his snowplough to help clear a path from the cottage to the railway. Once everything is cleared away, Percy takes the workmen home and Terence stays behind to look after Mrs. Kyndley's cottage.

Thomas and Toby take her to the shed, where the party is supposed to be, but as they arrive home, they find the sheds in darkness. Suddenly, a switch is thrown and the sheds are covered in lights. The Fat Controller congratulates the two engines, everybody sings carols and Mrs. Kyndley says it is the best Christmas party ever. 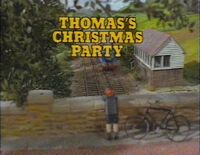 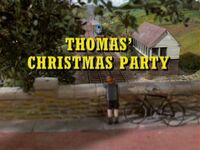 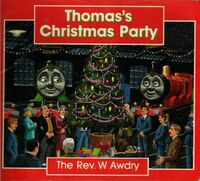 This episode is based on The Railway Series story by the Rev. W. Awdry 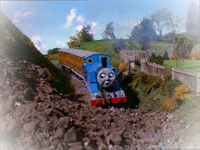 A flashback of Thomas being saved from a landslide by Mrs. Kyndley

The original version of the Railway Series story's scene 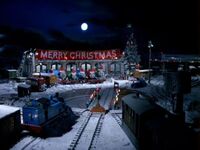 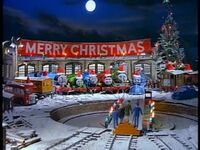 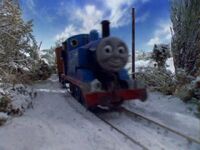 Retrieved from "https://christmas-specials.fandom.com/wiki/Thomas%27_Christmas_Party?oldid=189199"
Community content is available under CC-BY-SA unless otherwise noted.