The Fairly OddParents
Timothy Tiberius "Timmy" Turner is the protagonist of the Nickelodeon animated series The Fairly OddParents. Due to a life of misery caused by neglect by his parents and pain by such adversaries as his evil babysitter Vicky and his maniacal schoolteacher Mr. Crocker, he was granted with his assigned fairy godparents, Cosmo and Wanda. Timmy frequently makes wishes for Cosmo and Wanda (and their son Poof in later seasons) to grant for him, though he often does not think of the consequences of his desires. The series' Christmas episodes are strong examples of that.

In the series' first Christmas episode, "Christmas Every Day!", Timmy tells Cosmo and Wanda that Christmas is his favorite day of the year, as he enjoys receiving a tremendous amount of gifts from Santa Claus and spending the day with his mom and dad. So, because he enjoys Christmas so much, he wishes that every day was Christmas. At first, Timmy is thrilled with his wish, but he soon begins to notice that something is wrong when he starts receiving less and less presents from Santa. He then finds out that because of his wish, everyone has become so sick of Christmas that the armed forces are working to shoot Santa's sleigh down, and the mascots for the other holidays (the Easter Bunny, Baby New Year, Cupid, and the April Fool) have joined forces to eliminate Santa and destroy Christmas forever. Unfortunately, Timmy is unable to reverse his wish, because all the fairies in Fairy World, including Cosmo and Wanda, transfer their magic to Santa every Christmas Eve, and they do not get it back until Christmas is over. When the angry holiday mascots take Cosmo and Wanda captive to use the last of their magic against Santa, Timmy chases after them, getting some help from other children who celebrate Christmas along the way. He manages to make it to Santa's workshop in time to warn Santa of the oncoming attack, but the holiday mascots soon catch up. The mascots manage to drain Santa of his magic, but fortunately, Timmy, joined by every other kid in the world who has Internet access, manages to convince them that they do love the other holidays as well. Afterwards, Timmy rallies all the kids to tell Santa that what they want is for it to be December 26th, thus finally ending the endless Christmas. However, next Christmas, Timmy, Cosmo, Wanda, and the holiday mascots have to deliver the Christmas presents while Santa and his wife take a vacation in Hawaii.

At the beginning of "Merry Wishmas", Timmy is upset to find that Santa did not bring him the sled that he wanted, so on the day after Christmas, he just wishes that he had a sled. When he sees that none of the other kids in Dimmsdale got what they really wanted for Christmas either, he has Cosmo and Wanda deliver wish coupons to everyone. At first, Timmy thinks nothing could go wrong with this idea. But after Vicky greedily wishes she had a million wish coupons, everyone gets their hands on the extra coupons and starts making more wishes. Because everyone now loves Wishmas, Santa gives up on Christmas and moves in with the Turners, along with his wife and his elves. As a cover story, Timmy tells his parents that he won a radio contest where the prize was having Santa Claus come to live with him for a while. Timmy uses several means to cheer up Santa and get him to return to his job, but none of them work. But finally, when it comes time for Cosmo and Wanda to help their boss, Jorgen Von Strangle, deliver the wish coupons again, Timmy stops them by trapping his fairy godparents under a butterfly net and sending Jorgen down a trap door. When all the kids in the world are sad about not receiving wish coupons again, Santa is finally willing to restore Christmas and go out giving presents to everyone, with Timmy helping him, having finally learned a lesson about giving.

Timmy's next starring role in a Christmas special was the series' second live-action film, A Fairly Odd Christmas, which takes place approximately thirteen years after the events of the original series. As it is a sequel to the series' first live-action film, Timmy, now 23 years old, has been allowed to keep Cosmo, Wanda, and Poof thanks to a "Timmy Turner loophole" added to Da Rules, and he and his girlfriend Tootie are now running a business called Wishful Thinking, in which they use Cosmo and Wanda's magic to fulfill the wishes of unfortunate people everywhere. However, Timmy soon finds out that because of this, numerous children are starting to lose their belief in Santa. To make matters worse, when he is brought to see Santa about it, he and his fairies accidentally injure the big guy and give him amnesia, so Timmy has to fill in for Santa for Christmas Eve. Unfortunately, Timmy needs to get his name off of the Naughty List before he can do that, so he first has to find the Keeper of the Naughty List, Elmer the Elder Elf. Accompanied by his girlfriend and fairies, plus two of Santa's elves, Christmas Carol and Dingle Dave, and Mr. Crocker (who also wants to get his name removed from the Naughty List), Timmy goes on a death-defying journey to Elmer's residence and, with some unexpected help from Crocker, eventually convinces Elmer to take his name off the Naughty List. After managing this task, Timmy, along with Tootie and even Crocker, delivers all of Santa's presents all over the world.

Although Timmy is the main character on the show, he ironically did not appear in any of the Merry Nickmas interstitial shorts (however, he was rendered in Rankin/Bass-style stop-motion as part of a parody of Rudolph the Red-Nosed Reindeer in the 2004 made-for-TV movie Channel Chasers). 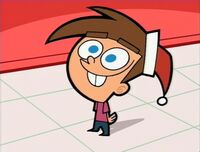 Timmy wearing a Santa hat in "Christmas Every Day!" 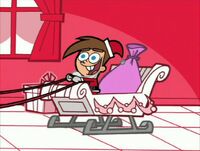 Timmy dressed as Santa in "Christmas Every Day!" 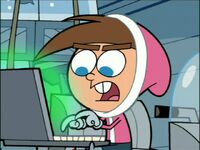 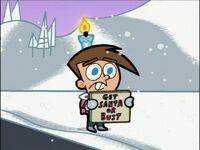 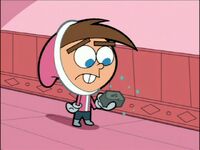 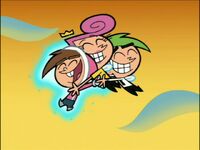 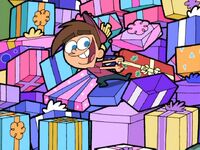 Timmy thinks to have found the sled he wanted for Christmas.

Timmy suits up to fill in for Santa.

Timmy and Tootie kissing.
Add a photo to this gallery

Retrieved from "https://christmas-specials.fandom.com/wiki/Timmy_Turner?oldid=171733"
Community content is available under CC-BY-SA unless otherwise noted.