To Grandmother's House We Go is an Christmas ABC TV movie, directed by Jeff Franklin and starring Mary-Kate and Ashley Olsen (all of whom worked on the network's sitcom Full House), that premiered on December 6, 1992.

Twin girls Sarah and Julie Thompson are two naughty but sweet children that drive their work-obsessed single mother, Rhonda, up the wall. They overhear her saying that they are a "handful" and she needs a "break". They decide to go to their grandmother's house for Christmas so they pack up their bags and hop on their bikes. But there's a problem: they aren't allowed to cross the street on their own. That's when the city bus pulls up and they sneak on through the back door. While riding it, an elderly lady tells them that it only goes downtown, uptown, and back. They also discover that Edgemont (where their grandmother lives) is actually hours away. After getting off in downtown, they spot Eddie Popko (a delivery man who has a crush on Rhonda) and his truck. They sneak into its back and only reveal themselves to him because Sarah desperately has to go to the bathroom. He does not like kids, but eventually starts to enjoy their company after he figures out that he gets large tips when they deliver packages with him. He evens buys them ice cream, as well as a lottery ticket with the numbers of their birthdate (6-13-19-87). After the day's deliveries are finished, he brings them home, only to be attacked by two robbers named Harvey and Shirley who steal his truck (with Sarah and Julie still inside). When Harvey and Shirley, discover them, they decide they can make some money by kidnapping them for ransom. Shirley calls Rhonda, asking for $10,000 in cash. She tells her that they will make the trade at the ice rink in Edgemont, and that she is to wear a red hat. Meanwhile, Harvey has begun to like them and when he asks Shirley why they never had kids, she replies that it's because they are criminals. Sarah and Julie eventually get to their grandmother's house and then Eddie and Rhonda get together after he saves them. He wins a lot of money on a TV show and everybody is happy spending Christmas together. 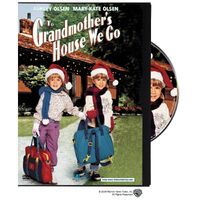 DVD
Warner Home Video
2004
Add a photo to this gallery

Retrieved from "https://christmas-specials.fandom.com/wiki/To_Grandmother%27s_House_We_Go?oldid=172909"
Community content is available under CC-BY-SA unless otherwise noted.