He's a young, calm young boy, who is the first to have not joined with Frosty (although he really wanted to join with his friends) after disappointing his father; Mayor Tinkerton one time during school, and also discovering his father's tragic childhood in the comic book (that he founded in the bottom secret room at the library).

Later, he tries to explain the situation to his brother; Charlie Tinkerton, his love interest; Sara Simple and his next-door neighbor friend; Walter Wader, but none of them listen to him, until he shows them the comic book about his father's childhood and all of the lies of Principal Pankley who captured Frosty's hat.

Together, he and his crew, including Sonny, Sullivan and Simon Skarlow, worked together to foil Pankley's plan, rescuing Frosty and proving the citizens that magic does exist.

Soon, he knows the truth about his father, although he did or did not break any Evergreen rules, but he makes the right choice by proving his father, his brother and his friends the truth. 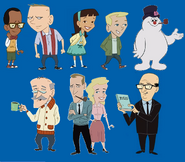 "You're looking for me?"

Add a photo to this gallery
Retrieved from "https://christmas-specials.fandom.com/wiki/Tommy_%22Thomas%22_Tinkerton?oldid=133649"
Community content is available under CC-BY-SA unless otherwise noted.