Christmas Specials Wiki
Register
Don't have an account?
Sign In
Advertisement
in: Specials, Disney, Originally aired on ABC,
and 3 more

Toy Story That Time Forgot is an animated television special produced by Pixar that aired on ABC on December 2, 2014.[1][2] As the title suggests, it is a spin-off of the Toy Story film series. The special was originally planned to be a six-minute short, but John Lasseter liked the idea and suggested making it into a holiday special.

Two days after Christmas, Trixie is depressed that Bonnie never plays with her like a dinosaur. Bonnie later takes Trixie, Woody, Buzz Lightyear, Rex and the Angel Kitty Christmas ornament to her friend Mason's house for a play date. When they get there, Bonnie sees Mason playing a new video game system and tosses her toys into Mason's playroom to join him. There the toys discover that Mason got a huge toy line of battling dinosaurs called The Battlesaurs for Christmas, led by Reptillus Maximus and The Cleric. Reptillus takes Rex and Trixie to get suited up in armor and he and Trixie grow closer. Meanwhile, The Cleric orders some other Battlesaurs to take Woody and Buzz hostage. After bonding, they go to an arena play set where Trixie watches, horrified, as Reptillus attacks Mason's toys. Soon Woody and Buzz enter the ring. They reveal to Trixie that Mason hasn't played with Battlesaurs yet and that they don't even know they're toys. Reptillus battles both Woody and Buzz till Trixie demands he stop. Then a beast named Goliathon enters and swallows Woody and Buzz. Trixie goes to get Bonnie's attention to save them and The Cleric orders Reptillus to stop her. While chasing her, he is shocked when he discovers his own toy package. Meanwhile the Cleric controls Rex with robotic arms and uses him to pull Woody and Buzz out of Goliathon. They then discover that The Cleric is the only Battlesaur who knows they're all toys and determined to make sure that the others don't find out, since Mason is too busy playing with his new game system. He then forces Rex to dispose of them and Angel Kitty in a ventilation fan. However, Trixie reaches the video game power cord but Reptillus confronts her. Trixie tells Reptillus the importance of being a toy and he turns the game off, getting the attention of Bonnie and Mason. They find him and decide to go play with the toys, saving Woody and Buzz in time. All of the Battlesaurs are moved by the playtime and enjoy their new roles. Later the toys head home with Bonnie and tell the other toys about their adventure. During the credits, Reptillus says he looks forward to seeing Trixie again. 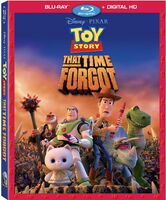 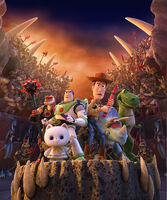