"Twice Upon a Time" is the thirteenth Christmas special of the BBC sci-fi drama Doctor Who. It originally aired over BBC One on December 25, 2017.

At the South Pole after an encounter with the Cybermen, the first Doctor refuses to undergo his regeneration. As he walks back to his TARDIS, he meets his twelfth incarnation after his own ordeal with the Cybermen and finds that he is in a similar state of mind. The two Doctors notice that the snowflakes have stopped falling, and are soon joined by an injured and confused man wearing the uniform of a British Captain from the First World War. All three of them, along with the first Doctor's TARDIS, are abducted by a spaceship.

On board the ship, they meet Bill, although the twelfth Doctor has doubts that she is real, despite her assertions to the contrary, having seen her converted into a Cyberman. They meet the pilot of the ship, a figure made of glass, which the Doctors observe is not symmetric. The pilot offers them freedom in exchange for the injured Captain, and reveals that he has been displaced from December 1914 while he and a German soldier were in a gun point stalemate. He only ended up at the South Pole because of an error during his displacement. The travellers refuse the pilot's offer and escape with the TARDIS, with which they navigate to the planet of Villengard, located at the centre of the universe.

After the two Doctors dodge some laser fire coming from a tower, the twelfth Doctor enters it and finds a rogue Dalek named Rusty, who had taken refuge from the other Daleks hunting it inside the tower. Rusty gives the Doctor access to the Dalek Hivemind, and there he finds out that the pilot and its ship, called the Testimony, were both created on New Earth, and their function is to extract people from their timelines at the moment of their death and archive their memories into glass avatars. The first and twelfth Doctors both find out that Bill Potts is actually a Testimony avatar that has been created from her memories.

Having found nothing evil to fight, the two Doctors agree to return the Captain to his proper timeline. When they do so, the Captain asks them to keep an eye on his family, and introduces himself as Archibald Hamish Lethbridge-Stewart (his descendant, Alistair Gordon Lethbridge-Stewart, would become a close friend of the Doctor's during the time he holds the rank of Brigadier). The snow begins to fall again as time resumes, and Captain Archibald finds himself once again in a gun point stalemate with a German soldier. Moments later, the Doctors watch the German soldiers sing a verse of "Stille Nacht", to which the British soldiers reply with a verse of their version of the carol, "Silent Night". As they sing, both sides lay their weapons down and meet each other under a flag of truce. The Twelfth Doctor explains to the first that he had returned Archibald to a point two hours ahead of where the Testimony had first taken him from so that he could experience the Christmas truce, which made sure that his life would be spared.

With Archibald's life saved, the first Doctor informs his future counterpart that he is now ready to regenerate, and says goodbye to him before returning to his own TARDIS. The shot of David Bradley alone in the console room dissolves into the scene with the first doctor, and we see the regeneration into his second incarnation. With only Bill's avatar for company, the twelfth incarnation still insists that she is not the real Bill Potts, but she answers that memories are what define a person. In order to help the Doctor understand, the Testimony send him avatars of two of his former companions, Clara and Nardole, and restore the Doctor's memories of Clara that he lost. The Doctor refuses to give a testimony of his life to the avatars, and the Testimony respect the Doctor's wish to be alone. The avatars of Clara and Nardole leave after embracing the Doctor.

The Doctor returns to his TARDIS and leaves some advice for his future self before he regenerates into his thirteenth incarnation, who looks into a mirror to find out what she looks like now. The TARDIS's cloister bell begins to sound as a result of it suffering multiple failures due to damage sustained during the regeneration process. As she loses control, the Doctor tumbles out of the TARDIS, and sees the console room exploding before the ship dematerialises while she plummets toward Earth. 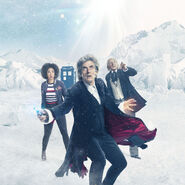 The Captain
Add a photo to this gallery

Retrieved from "https://christmas-specials.fandom.com/wiki/Twice_Upon_a_Time?oldid=152978"
Community content is available under CC-BY-SA unless otherwise noted.