"Waiting for Santa" (or in Australia: "Barney's Happy Christmas") is the Christmas episode of the direct-to-video show Barney & the Backyard Gang, produced by The Lyons Group and released on May 1, 1990 as its fourth episode. It is the first of the Christmas-related Barney material to be produced exclusively to home video. It gives a special thanks to all the Barney Fan Club members (who joined since the previous episode "A Day at the Beach") and schools nationwide who contributed the episode's Christmas decorations.

Barney and the Backyard Gang travel to the North Pole to assure new-friend Derek that his name is on Santa's good list. They play in the snow, frolic on ice, and learn that giving things to others is what Christmas is all about. 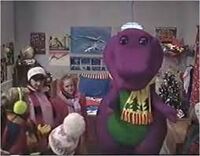 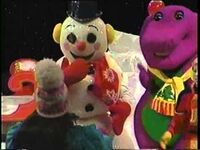 Retrieved from "https://christmas-specials.fandom.com/wiki/Waiting_for_Santa?oldid=179754"
Community content is available under CC-BY-SA unless otherwise noted.