Wayne is one of the main characters from the Walt Disney Animation Studios Christmas special Prep and Landing and its sequels. Voiced by Dave Foley, he is a Special Operations elf who, after working tirelessly on Prep & Landing for 227 years, is upset when he doesn't receive an expected promotion to be the Director of Naughty List Intelligence. Instead, Magee, the North Pole Christmas Eve Command Center Coordinator (NPCECCC for short), partners Wayne with Lanny, an idealistic rookie who has an undying enthusiasm for Christmas. He is also the older brother of Noel.

Wayne has worked on Prep & Landing for 227 years, longer than almost all other elves currently active in the division.

Wayne graduated without much academic distinction from Kringle Academy, ranking in the middle of his class.

Wayne and his roommate, Big Mike, were infamous for their campus hijinks, and were nearly expelled for their most renowned prank: somehow managing to encase their instructor’s office entirely in a block of ice. Wayne redeemed himself, however, by successfully completing the Tannenbaum Trial with record scores, thanks mostly to his quick thinking and instincts. This ingenuity was not lost on the Big Guy, who quickly assigned Wayne to Prep & Landing.

Wayne and Magee dated briefly after meeting at a Christmas party, but the romance fizzled after the “insensitive knitted sweater incident”. Fortunately, they have remained close friends over the years.

Wayne was quite the athlete in his day, and still enjoys participating in the occasional sporting event, especially those pitting Prep & Landing against the Coal Elves.

Dislikes: Wayne cannot stand the smell of peppermint. It often gives him a rash.

Random Facts: Wayne plays cards with Thrasher the Reindeer every Thursday night. At Thrasher’s insistence, the location is undisclosed.

Not being much of a cook, Wayne tends to eat out a lot at the Fruitcake Factory. His refrigerator is filled mostly with leftovers and egg nog well past its expiration date. 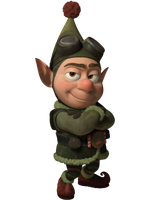 Concept art of Wayne.
Add a photo to this gallery

Retrieved from "https://christmas-specials.fandom.com/wiki/Wayne_(Prep_%26_Landing)?oldid=111390"
Community content is available under CC-BY-SA unless otherwise noted.