This article is about the 1954 film. For the song the film is named after, see White Christmas (song).

White Christmas is a 1954 American musical war film directed by Michael Curtiz and starring Bing Crosby, Danny Kaye, Vera-Ellen, and Rosemary Clooney. Filmed in Technicolor, it features the songs of Irving Berlin, including the title song, "White Christmas", which was originally introduced in Holiday Inn. The movie features two performances of the song; the first is an unadorned version by Bing Crosby sung against a music box accompaniment. The second is a full production number with a boys choir, young ballerinas, and Bing Crosby, Danny Kaye, Rosemary Clooney, and Vera-Ellen leading the entire cast to a triumphant ending.

Produced and distributed by Paramount Pictures, the film is notable for being the first to be released in VistaVision, a wide-screen process developed by Paramount that entailed using twice the surface area of standard 35mm film. This large-area negative was used to yield finer-grained standard-sized 35mm film prints.

During World War II, Bob Wallace, a well-known song and dance man, and some of his mates are putting on a holiday show for their army division. It is General Thomas Waverly's last day in command, and when he makes a belated appearance at the show, the entire division sings "The Old Man" in tribute. Shortly thereafter, during a skirmish, Phil Davis rescues Bob from a falling building, hurting his elbow in the process. When Bob visits him in the hospital, Phil tells him he has written a song for Bob's act. Bob notes that it's for two performers, and his act is a solo. Phil looks sad, holds his elbow and says that he doesn't expect anything. Bob caves in, agreeing to consider it.

In a montage of news articles, it is seen that Phil and Bob team up to become the succesful "Wallace and Davis", eventually producing and touring with their own show. Shortly before Christmas one year, they are closing the show in Florida. The cast gets a paid holiday, and Wallace and Davis are headed to New York to drum up some publicity. Phil tries to get Bob to go on a double date with a couple of the cast members, but is told that they are spending their last night in Florida looking at a sister act. They are the sisters of one of Phil and Bob's army pals who has written to ask them if they would check in on the pair.

At Novello's, Betty and Judy Haynes are seen backstage, and it is revealed that Judy actually wrote the letter to Phil and Bob, not their brother. They sing and dance to "Sisters". Afterwards, they join Phil and Bob at their table. Bob has been taken with Betty, and Phil, eager to promote his friend's romance, takes Judy dancing, leaving the other two alone. It is the girls' last night in Florida; they are booked in Vermont over Christmas. Before the sisters' next performance, the sheriff arrives to arrest them; the owner of their hotel claimed they burned a hole in the rug and wanted $200 so they had snuck out. Bob and Phil help the girls to escape into a taxi, and Phil hands them his and Bob's train tickets. After they leave, the two men find a record of the girl's act and some props, and lip-synch the number to a delighted crowd. Afterwards they too flee the sheriff, catching the train just as it pulls out of the station.

Bob is disgusted to discover that Phil doesn't have their train tickets and they will have to sit up in the coach car all night. However, his ire quickly dissipates when Betty and Judy join them for drinks and a song. Bob and Phil agree to go to Vermont, after Phil pointedly shows Bob his elbow. They all wake up the next morning in time to get off at Pine Tree, Vermont...where there is no snow.

At the inn, the housekeeper, Emma, tells the girls they'll have to cancel them as they have no guests. The innkeeper wanders by; it's General Waverly to Bob and Phil's great delight. He insists that he wants the girls to stay for their act. After they perform that evening to an empty room, the girls talk with Emma about convincing General Waverly to let them perform for half pay. As everyone continues to discuss the lack of visitors, Phil notes that what they need is a big act that people would come to see. Judy suggests Wallace and Davis; Phil thinks they might be too big, but Bob decides they should bring the whole show and do a Christmas Eve performance, filling in with Betty and Judy for any acts that can't make it.

A confused General Waverly discovers his entire inn has been taken over by the show; rehearsals, actors, and stage hands. He is unconvinced by Bob's explanation for why this is a good idea, and uncertain that the show will bring customers, but tells them to go ahead. He tells Bob that his inn-keeping days are numbered because he's going back into the army. However, a letter that arrives in the mail shortly thereafter, which General Waverly, who doesn't have his reading glasses, asks Bob to read to him, dashes his hopes.

Bob is determined to do something more for General Waverly, and conceives the idea of going onto the Ed Harrison show to make a pitch that the former members of their army division come to Pine Tree for Christmas. Emma, listening in on the other line when Bob makes the call, hears Ed proposing to put the whole show on TV with General Waverly, creating a lot of publicity for Wallace and Davis. She puts down the phone before she hears Bob refuse and thinks it is Bob's plan. She tells Betty, who is initially unable to believe it, until Phil asks if Bob had talked to Ed and seems to confirm the plans. Betty and Bob's romance, pushed along by Judy and Phil, had been progressing nicely, but now she pushes Bob away.

Judy is convinced that Betty is deliberately putting up barriers to romance because she feels she has to take care of Judy until the latter is married or engaged. She convinces a reluctant Phil to pretend he is engaged to her; they make the announcement at the holiday party General Waverly has thrown for the cast of the show. Betty congratulates them, but then turns and walks out on Bob when he attempts to celebrate the news with her. Leaving a letter for her sister, she goes to New York to perform as a solo act in a club there.

Betty is horrified, and she and Phil confess everything to Bob. He is very angry with them. He heads to New York to explain matters to Betty and go on the Ed Harrison show. Before he leaves he tells Phil to make sure General Waverly doesn't watch it, and Phil promises he will even if he has to break his elbow again. In fact he fakes an injury to his leg to keep General Waverly away from the TV.

In New York, Betty sings "Love, You Didn't do Right By Me" at the Carousel Club. Afterwards, she sees Bob who explains about the phony engagement and apologizes for whatever he did to upset her so much. Ed breaks in to say that he has everything set up just how Bob wanted it and they have to leave; a confused Betty tells Bob she'll think about returning to Vermont.

On the Ed Harrison show, Bob sings "What Can You Do with a General?" and invites the men of General Waverly's former troops to come celebrate Christmas eve in Pine Tree. He stresses that his show is not getting anything out of the deal; they are doing this as a gift for General Waverly.

Christmas Eve arrives and the inn is full and bustling. The former troops have arrived and are putting on their uniforms to recreate the song they sang for General Waverly on his last day in command. Emma has arranged to send all of his civilian suits to the cleaners so he will be in uniform as well, to the delight of his granddaughter Susan. Betty shows back up and is reunited with Judy.

The show starts when General Waverly enters the dining room of his inn. His officers are there to escort him to a table with a cake and candles, and the other troups come pouring off the stage singing "The Old Man". They line the aisle for "inspection". General Waverly walks up and down the row, admitting he's never seen anything so beautiful. He blows out his candles and the men disperse. Wallace and Davis' show immediately starts up.

The show ends with the song "White Christmas"; Betty and Bob are reconciled, and the stage backdrop lifts to reveal that it has started snowing during the show.

As of 2010, Paramount Pictures granted television rights to Rainbow Media Services for airing on AMC to air the film. 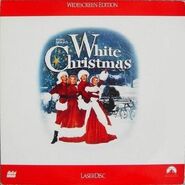 Retrieved from "https://christmas-specials.fandom.com/wiki/White_Christmas_(1954_film)?oldid=167872"
Community content is available under CC-BY-SA unless otherwise noted.