Winnie the Pooh and Christmas Too

Winnie the Pooh and Christmas Too is an animated Christmas television special based on the Winnie the Pooh cartoons produced by the Walt Disney Company (primarily the animated show The New Adventures of Winnie the Pooh). It was originally broadcast on ABC on December 14, 1991. It was nominated for the Primetime Emmy Award for Outstanding Children's Program in 1992 (unfortunately, it lost to Mark Twain and Me).

Two days before Christmas, Christopher Robin and his Hundred Acre Wood friends have gathered by a weather vane where he's writing a letter to Santa Claus. He asks them what they want for Christmas, and they each have an answer: Rabbit wants a new fly swatter to use against the bugs who constantly invade his garden, Eeyore wants an umbrella to prevent snow from falling on his house, Tigger wants a snowshoe so he can bounce in the snow, and Piglet, who can't really decide on what he wants, says that he'll be fine with whatever Santa brings him. During this, Pooh keeps suggesting that Santa also bring them a pot of honey "in case certain guests drop by." After Christopher Robin tells him that he himself wants a sled "big enough for me and maybe a friend or two," he sends the letter off into the wind.

The next day, Pooh has just finished putting up his Christmas tree (that is to say, he has painted a drawing of a Christmas tree on his wall) when Piglet comes in, informing him that, when they were writing their letter to Santa yesterday, he didn't actually ask for anything himself. The two go out to find the letter, which luckily for them hasn't gotten very far. Afterwards, they meet up with Tigger and Eeyore, saying they need a pencil, and they then go to Rabbit's house just as he's finished fending off another attack by the bugs, who have just eaten his Christmas tree.

After they explain that Pooh forgot to ask for something in the latter, Rabbit lends them a pencil so they can rewrite the letter. Pooh actually has trouble deciding what he wants to wish for, though, so Rabbit tells Piglet to add a pot of honey, then tells him to make it two pots of honey after Pooh thanks him for the suggestion. The group then take turns suggesting better gifts for each other to put on the letter - resulting in the list now requesting a bug sprayer for Rabbit, spring-powered snowshoes for Tigger, a condominium for Eeyore, and 11 pots of honey for Pooh - before they realize that it's noon on Christmas Eve. Following this, Tigger, Eeyore, and Rabbit go off to get a tree big enough for all the stuff they just wished for, with help from a reluctant Gopher (he's supposed to be hibernating).

In the meantime, Pooh and Piglet go back to the weather vane where Christopher Robin sent the letter yesterday and cast it off into the wind again. But as soon as they leave, the wind shifts southward, and the letter follows Pooh all the way to his house. Upon telling Piglet what just happened, Pooh worries that the rest of the gang won't get their presents as a result of this, so he takes it into his hands to make sure the gifts are delivered. Disguised as Santa, Pooh visits Tigger, Rabbit, and Eeyore and gives them a super-bouncer barrel, a bug sprayer made from a teapot, and a mobile home made from a suitcase, respectively - which then break apart upon use.

Demanding to know what's going on, the three approach "Santa" as he and Piglet (who's disguised as a reindeer) are trying to deliver Christopher Robin's sled. Although Pooh insists that he is Santa, Rabbit requests that he make his "reindeer" fly, and when he attempts to do so, Piglet slips and they both fall downhill, causing Pooh's fake beard to fall off. Pooh explains to the others that the wind changed when he and Piglet last tried to send the letter, and unfortunately, the wind has now died down, so they cannot try that again. Pooh decides that he's going to try and bring the letter to Santa by himself, tearfully leaving the rest of the gang behind to wait up for him, telling them it would be worth missing Christmas if he could "bring Christmas" to them. But Pooh does not get very far in his journey before the wind suddenly picks up again and takes the letter, so he gives up in despair and heads back home.

Back at the sight of the big tree they got earlier, Tigger, Rabbit, and Eeyore are anxiously awaiting their presents from Santa. Piglet, however, is sad that this is the first Christmas they're spending without Pooh, and confides to the others that, after having been unable to decide what he wanted for Christmas, all he really wants now is to have his best friend back. Upon hearing that sentiment, the other three admit that they agree with Piglet. Just then, Pooh returns, admitting to the others that he failed to deliver the letter to the North Pole, but Piglet tells him that now that he's back, they don't really care about the presents. Christopher Robin then arrives on his new sled, bringing with him their gifts from Santa that they had each originally asked for. Pooh (who of course got a honey pot) tells Christopher Robin all about how they tried to rewrite the letter but couldn't get it to Santa on time, and says he's learned that "being with friends is nicer."

The special's original ABC broadcast was prefaced with an introductory segment by the Walt Disney Company's then-current CEO, Michael Eisner, accompanied by the walk-around costumed characters of Pooh, Tigger, Rabbit, and Eeyore, who bring in a palm tree to use as a Christmas tree. To fill out the hour the special was scheduled for, it was followed up by the Donald Duck cartoons The Hockey Champ and Bearly Asleep, and ended with a sneak peek at Disney's most recent animated movie at the time, Beauty and the Beast. The first airing of the special ranked 53rd out of 92 shows that week, averaging a 10.8/20 rating/share and tying for first place in its timeslot.[1]

The original format of the special, with the addition of the Donald Duck cartoons, was repeated the following year, this time with a behind-the-scenes look at The Muppet Christmas Carol at the end. The 1993 broadcast included a documentary on the making of the previous Disney animated feature, Aladdin. The special was later aired on CBS in 1995, this time accompanied by The New Adventures of Winnie the Pooh episode "Magic Earmuffs" and a documentary about the making of Toy Story in place of the Donald Duck cartoons.[2] The special subsequently returned to ABC following Disney's acquisition of that network and continued to be shown there, along with "Magic Earmuffs", from 1996 to 2001, now without Michael Eisner's introductory segment.

The special was released on VHS on November 13, 1994, with "Magic Earmuffs" included as a bonus episode. Early copies of the tape also included a bonus Spot episode, "Spot's Winter Sport", which was dropped in later reissues. The special and "Magic Earmuffs" were also featured on a double-feature Laserdisc titled Winnie the Pooh: Special Holiday Edition, which also featured the contents of the Winnie the Pooh: Frankenpooh VHS (consisting of The New Adventures of Winnie the Pooh episodes "The Monster Frankenpooh", "Things That Go Piglet in the Night", and "Pooh Moon").

Currently, the special itself has not been released on DVD, Blu-ray, or any digital streaming services in its original form, instead being integrated as a flashback in the 2002 direct-to-video film A Very Merry Pooh Year. However, it is slightly edited to match up with the new animation made for the rest of the film - Christopher Robin's lines were redubbed by William Green, and Rabbit's animation was recolored to his usual yellow-furred appearance (as opposed to the oddly light-green hue his fur had in the special and the New Adventures show). 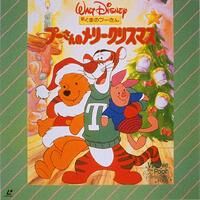 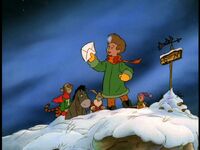 "Next stop, the North Pole!" 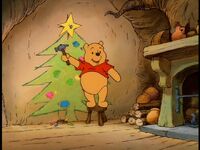 "Hello, Piglet! How do you like my Christmas tree?" 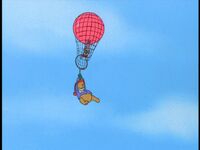 Pooh and Piglet search for the letter. 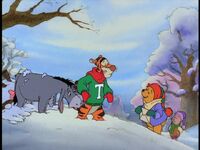 "Tigger, would you have a pencil about you?" 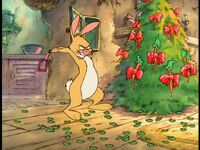 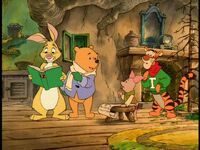 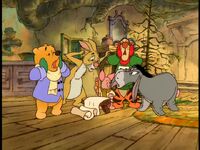 The gang realizes it's half past the day before Christmas. 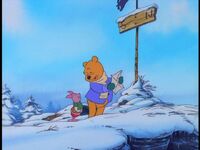 "Is the wind pointing to the North Pole, Piglet?" 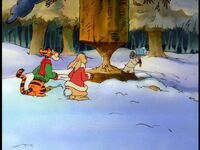 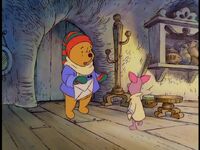 Pooh and Piglet find that the letter "followed them home." 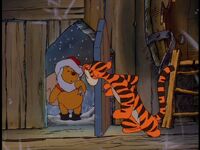 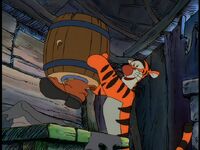 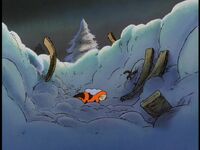 "Definitely not what I always wanted." 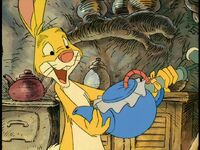 Rabbit is glad to receive his insect-sprayer... 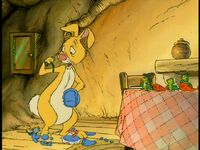 ...until he actually tries to use it. 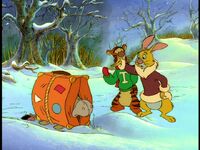 "But Santa was supposed to bring you a new home!"
"He did - a mobile home." 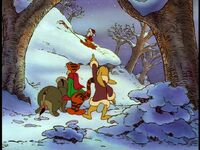 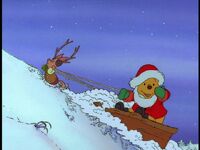 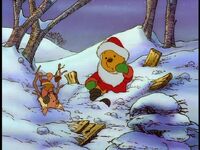 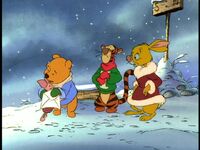 Pooh decides to bring the letter to Santa himself. 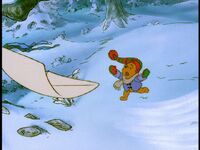 "Please come back! I'm supposed to take you to Santa!" 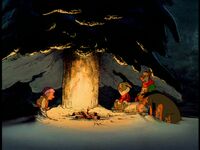 Piglet tells the gang that he'd give up his present just to have Pooh back. 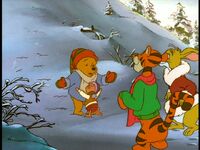 Pooh reunites with his friends. 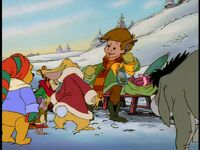 "Hey guys! Look what Santa left for you!" 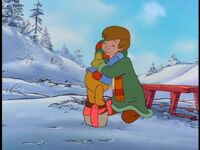 "This would be the perfect Merry Christmas height... for this."
"Silly old bear."