Christmas Specials Wiki
Register
Don't have an account?
Sign In
Advertisement
in: Episodes, A Christmas Carol, Originally aired on ABC,
and 5 more

"Xmas Marks the Spot" is the Christmas episode of the Sony Pictures/DIC Entertainment animated television series The Real Ghostbusters, and also the last episode of the show's first season. The episode's writer, J. Michael Straczynski, has stated this to be his personal favorite episode of the series.

On the way home from a bust in upstate New York on Christmas Eve, a snowstorm hits and the Ghostbusters get lost. Despite Egon's assurance, they take a left turn and missed the turnpike. Ecto-1 soon stalls out, and Peter grumpily goes off to look for a phone booth. Ray explains to Winston that Peter was never able to enjoy Christmas when he was younger because his father was always away at this time of the year. As the Ghostbusters travel on a mountain road, they unknowingly end up getting swept up in a rip in the space-time continuum.

When the group comes to, they find themselves on a hill overlooking Victorian England. Unaware that they've been transported back in time to 1837, the Ghostbusters head into town, passing by Bob Cratchit and Tiny Tim just as they are leaving the butcher's shop, having picked up their meager dinner. Suddenly, the P.K.E. Meter detects Jacob Marley and the three Ghosts of Christmas. They enter Ebenezer Scrooge's house and capture the three ghosts (who are all appearing before Scrooge at once) before they can reform him. Scrooge thanks the Ghostbusters for their help, but when Peter presents the bill, Scrooge makes a fuss about it, refusing to pay. When the Ghostbusters threaten to release the ghosts, Scrooge relents and flips them a mint 1837 coin. After the Ghostbusters leave, Scrooge goes to the window and declares war on Christmas.

Upon returning to the present, the Ghostbusters find Ecto-1 and Ray manages to get it started. Egon mentions that he can't help but feel those events they saw were very familiar to him. After returning to headquarters, Egon goes downstairs to put the ghosts into the Containment Unit while the others go out to look for a Christmas tree. To their surprise, Janine and Slimer oddly respond "Bah!" at the notion of Christmas.

Peter, Ray, and Winston make their way to 5th Avenue and, to their surprise, find it decorated with pictures of Scrooge. They see a book by Scrooge, titled A Christmas Humbug, being sold. At that, Ray realizes that they had gone through a time slip earlier. This is confirmed when a woman tells them in 1837, Scrooge defeated the Ghosts of Christmas, and the holiday was eliminated afterward. As a result, history has been altered in the form of everyone acting like Scrooge - stingy and hating Christmas. Peter thinks they should be able to solve the problem if they can just bring the ghosts back to 1837, but Winston and Ray point out that Egon's about to put the ghosts in the Containment Unit.

The trio rush back to the Firehouse, but unfortunately, they are too late to stop Egon from putting the ghosts into the Containment Unit. Once Egon is informed of the situation, he tells them that they'll have to work fast, because time is moving on both sides of the time-slip, and they have until the end of Christmas Eve to fix things. While Egon improvises a hairline fracture in the Containment Unit to extract the Ghosts of Christmas, Peter, Ray, and Winston will have to go back to Scrooge's time and impersonate the three ghosts. If Egon fails, they will have to permanently replace the ghosts.

Peter, Ray, and Winston head back to the time-slip and return to 1837 England, just as Scrooge has begun writing A Christmas Humbug. Despite his objections, Peter impersonates the Ghost of Christmas Past and uses a View-Master to show Scrooge "our version of This is Your Life." After reminding Scrooge of his sour past he had, Peter tells him that he shouldn't blame it on Christmas, in the process learning a lesson how sour he's been about his past Christmases as well. Afterward, Winston, as the Ghost of Christmas Present, takes Scrooge around the town, by way of swinging from a rope, to show the poor living their miserable lives in poverty. Lastly, Ray impersonates the Ghost of Christmas Future and tries to keep true to the fact that the third ghost doesn't speak by communicating to Scrooge via a game of Charades.

Back in the present, Egon ventures into the Containment Unit, with help from Janine and Slimer. Egon reminds them he has only an hour to retrieve the three ghosts, and they should keep the Grid Device on for him. Janine goes upstairs to watch Egon's progress on the monitor, all the while Slimer tries to keep the Grid Device cooled while trying to avoid getting sucked into the Containment Unit himself. Just as time is running short, Egon finds the Ghosts of Christmas, but the other ghosts have noticed Egon and chase after them. Fortunately, Egon and the ghosts enter the fracture and escape the Containment Unit. Short on time, the ghosts agree to jump into a Ghost Trap so Egon can transport them quicker.

Egon then rushes to the time slip and returns to Victorian England to let the three ghosts loose. Imitating Jacob Marley, he tells Scrooge that he will be visited by three "more" ghosts (much to Scrooge's befuddlement), after which the Ghost of Christmas Past comes in to start finishing the job from before. Peter admits to the other two Ghosts that he has learned his lesson about Christmas, saying he finally learned to appreciate the holiday after nearly losing it. The Ghost of Christmas Present instructs the Ghostbusters to take hold of his robe, and Egon, Ray, Winston, and Peter are immediately returned to the Firehouse kitchen in the present, with everything back to normal. Back at the Firehouse, the group settles down for a Christmas party. Winston admits he always thought A Christmas Carol was just a fictional story, and it makes one wonder what else is real, when suddenly, they hear Santa Claus flying above outside. He says Marry Christmas to all and they say and to all a good night. 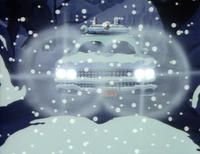 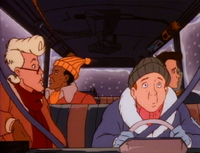 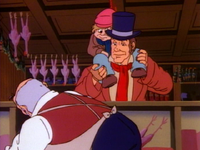 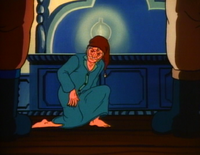 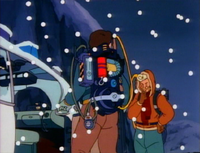