Ziggy's Gift is an animated TV special based on the comic strip Ziggy, originally broadcast on ABC on December 1, 1982. It was written by Ziggy's creator Tom Wilson and directed by Richard Williams, the latter whom also plays as a Crooked Santa. Animators included Eric Goldberg and Tom Sito with music by Harry Nilsson, in which he also written & performed the original song "Give, Love, Joy". In 1983, the special won the Primetime Emmy Award for Outstanding Animated Program.

Ziggy and his faithful dog Fuzz take a job as a street Santa to raise money for the poor. Surrounded by crooked Santas, sneaky thieves and suspicious cops, Ziggy remains honest and kind. 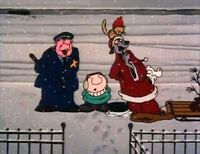 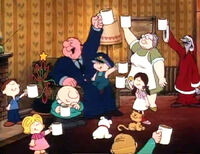 Retrieved from "https://christmas-specials.fandom.com/wiki/Ziggy%27s_Gift?oldid=144260"
Community content is available under CC-BY-SA unless otherwise noted.