Zoey first appears as a yearling doe in Mrs. Prancer's class with Rudolph and his cousin Arrow, but unlike the other yearlings, she (along with Mrs. Prancer) doesn't make fun of Rudolph's red nose and feels sorry for him. In fact, on Christmas Eve, while his father is out with the other seven reindeer, delivering toys with Santa Claus, Zoey points out that Rudolph's nose doesn't look funny at all, but, rather, is makes him unique. The two notice they are under a mistletoe, but before they can kiss, a jealous Arrow (who is in a relationship with Zoey) arrives and makes Zoey leave with him.

Years later, a now teenage Zoey takes part in The Junior Reindeer Games with Rudolph and Arrow. She finishes second to Rudolph in The Sleigh Race, but is outraged when he is disqualifed after his nose lights up causing a crash (this was caused by Arrow, whose taunts caused Rudolph's nose to light up) and confronts Arrow (who was made winner by default). Arrow says that the point is he won and Santa is going to notice him, but Zoey tells him that he's no Flyer and says that Flyers are brave and have character and true hearts like Rudolph. But when Arrow points out that Rudolph has a red nose (which in his opinion makes Rudolph unworthy to be a Flyer), Zoey calls him shallow and says that she doesn't want to be Arrow's doefriend anymore.

After Rudolph runs away, Zoey goes off to find him and ends up crossing the bridge of Stormella who takes her hostage but she is later rescued by Rudolph and his friends Slyly and Leonard and returns home and is reunited with her parents. She is then seen kissing Rudolph good luck before he leaves with the other reindeer to guide Santa Claus's sleigh through Stormella's storm. She is last seen along with her parents standing next to Arrow after Rudolph, Santa and the other Flyers return. 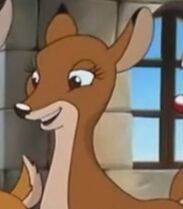 Zoey in school with Rudolph and Arrow

Zoey smiling to Rudolph as she leaves with Arrow. 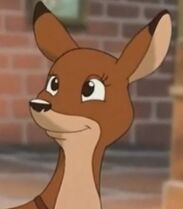 Zoey and Rudolph in the Junior Reindeer Games

Zoey confronts Arrow for cheating in the games

Zoey reveals her feelings for Rudolph. 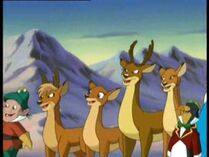 Zoey with her parents and Arrow when Rudolph and the Flyers return.

Retrieved from "https://christmas-specials.fandom.com/wiki/Zoey?oldid=186363"
Community content is available under CC-BY-SA unless otherwise noted.