Zoey's father first appears in the film at The Christmas Eve Launch with his wife and daughter watching Santa Claus and the Flyers take off.

He next appears years later when he, his wife along with Blitzen and Mitzi come to Santa for help to find Rudolph and Zoey. He reunites with Zoey when she along with Rudolph, Slyly and Leonard are found by Boone and Doggle.

He last appears along with his wife, daughter, Arrow and several of the other villagers on Christmas Day singing Rudolph the Red-Nosed Reindeer as Rudolph, Santa and the Flyers return from their deliveries.

Zoey's father, his wife and daughter

Zoey's father reunites with his daughter 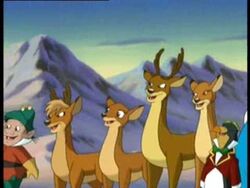 Zoey's father, his wife, daughter and Arrow watching Rudolph, Santa and the Flyers return
Add a photo to this gallery

Retrieved from "https://christmas-specials.fandom.com/wiki/Zoey%27s_father?oldid=135959"
Community content is available under CC-BY-SA unless otherwise noted.